This coming Sunday the Twisted Pepper closes its doors and calls time on what was one of Ireland’s most iconic music venues. Most of you will also know that it was once home to 3fe and indeed was the place where we first opened our doors in December of 2009.

We closed up and made way for Vice Coffee in February of 2013, in an effort to create some head space for our upcoming roasting venture. I look back fondly on those days and will be forever grateful to Trev, Eoin, Ian, Conor and the rest of the crew at Bodytonic for giving us a space to set up shop.

The Twisted Pepper was, at best, a divisive venue but to many DJ’s, Booksellers, Baristas, Hairdressers, Roller Derbiests and Tango Dancers (amongst others) it was a space to let loose and take a risk on some crazy ideas, some of which managed to work out in the end. It was our Boot Room, our Cavern Club, our Factory and our Woodstock all rolled into one.

Over the years we had many ups, a few downs and met as eclectic a bunch of people as you could possibly hope to meet, many of whom I call friends now. As the news broke about its closure the other day, I got to thinking of my favourite 3fe moments at the Twisted Pepper and so I thought I’d share some of them here with you, for old times sake.

Part of me is sad its gone but the rest of me is glad its over so we can all sit back and enjoy the nostalgia. I’m not sure there’ll ever be another Twisted Pepper, but I’m definitely glad I was a part of it while it was here.

We made about €350 that day and I thought it was a solid enough start. The following Monday there was no festival and I think I sold about 10 cups of coffee, mostly to family and friends as the reality of the task ahead slowly dawned on me. A few weeks back, 3fe joined the Beatyard in Dun Laoghaire and welcomed over 5,000 people to the pier for music, booze, dancing and food. We’ve come a long way, baby.

Two of those people were Cian and Acky of Design Goat fame, who later went on to design our shop on Grand Canal street as well as many other beautiful spaces in the city. The other guy was a polish film maker whom I’ve never heard from again.

It was St. Patrick’s Day 2010 and the bands were practicing on Middle Abbey Street before the parade. David Walsh took this photo and I’m very glad he did. 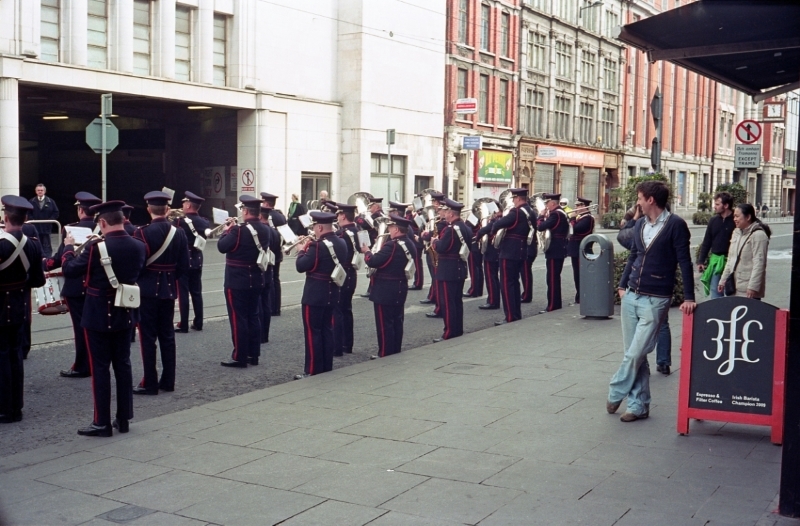 We sold out the 100 tickets in a matter of days and people came from as far away as Germany, France, Russia and even Australia (though that guy was on a European holiday at the time). Tamper Tantrum has grown into a bit of a monster since then, clocking up over 50,000 interactions a month on its podcast and hosting other events in places like Shaghai, Nice, Manchester, Taipei and Vienna, amongst others. No matter where it goes from here it will still be hard to beat the atmosphere and buzz there was at that very first show.

They pull open the big heavy lobby door to find a fully fledged coffee shop in front of them. They look really confused, close the door and retreat 12 steps or so to see what it says above the door. They re-enter and tentatively ask “is this the Twisted Pepper?”. I’d go look for their coat while they seriously consider how drunk they must have been to have missed the coffee shop the night before.

Only Trev would have suggested I set up shop at his premises, rent-free until it started to grow, and I’m eternally grateful that he did. If he wasn’t being supportive he was giving me a much-needed toe in the hole and although the Trev experience is not for everyone, there’s a lot of successful people in Dublin right now that owe Trev a debt of gratitude.

A regular customer arrived in one day and ordered a flat white. He and Ger had a mutual love for each other which manifested itself into unbridled abuse on a daily basis. Ger put the coffee down and said "€3 please".

The customer pulled some loose coins out of his pocket, looked closely and said "I only have €2.90?"

Little did we know that the lines running through the floorboards had long since been pierced many times over by various trades folk. I first noticed one blue drop on the counter, then another. Within seconds customers were desperately running for cover as this mystery blue liquid dropped from every crack, hole and light fitting in the ceiling, leaving us with a destroyed cafe and a humungous dry cleaning bill. There were better days.